It has been written that there are two grandmothers of the independent living movement. One was Mary Switzer, the Director of the Office of Vocational Rehabilitation from the 1950s to the late 1970s. During her tenure and within a 15-year period, dollars for vocational rehabilitation increased 40-fold. An amendment in 1965 included tuition and attendant care for persons with severe disabilities. Mary Switzer demonstrated to Congress the financial rewards of turning adults with disabilities into "productive" citizens and "taxpayers." Why is Gini Laurie considered one of the grandmothers of the independent living movement? Who was she and why did she get involved with disability? She revealed a very personal reason, October 1988, at the dedication of the new St. John's Rehabilitation Hospital in St. Louis.

"My father was a surgeon and on staff at the old Euclid Avenue St. John's [Hospital]. In 1912, the year before I was born, four siblings were struck by polio: a 12-year-old sister was mildly disabled, a 6-year-old brother very severely disabled, and two sisters, aged 3 and 9, died within days at St. John's. In their memory, my mother painted a mural on the ceiling of the St. John's chapel depicting them as angels.

"Sixteen years later, I watched my significantly disabled brother die of pneumonia and underventilation at St. John's. His funeral mass was in St. John's Chapel, underneath the mural of our sisters."

Because of her family experience, it was only natural for Gini Laurie to become a Red Cross volunteer at one of the 15 polio respiratory centers operating in the late 1950s.

The centers, where individuals with severe polio in need of rocking beds and iron lungs were sent, provided superb medical and psychological rehabilitation but, until 1953, most of the permanent respirator users seemed doomed to remain in the hospital for the rest of their lives. In order to save money by avoiding lifelong hospitalization at the high daily rate of $37, Rancho Los Amigos Respiratory Center for Poliomyelitis in Downey, California, pioneered a system of home care that cost only $10 per day and polio survivors were sent home with their iron lungs and chest cuirasses.

Meanwhile, Gini Laurie volunteered at the Toomey Pavilion Respiratory Center in Cleveland, Ohio, and kept up with her old polio pals who had gone home. Reflecting in her later years, Gini commented that it was "apparent they [polio survivors] had two vital needs: people and information. They wanted to keep [up] with each other and wanted to share information about their lives and equipment."

Gini and her husband, Joe, started to meet those needs by building a heated pool with a lift at their home, where they held annual reunions of the alumni of the respiratory center.

In 1958, the same year, they started publishing Toomeyville Jr. Gazette, featuring news of how polio survivors managed at home.

The sudden loss of attendant payments caused panic. There was no Social Security Disability, no Medicare, no Medicaid, no vocational rehabilitation for people with severe disabilities. There was only welfare or help from churches or family. Fortunately, polio survivors who had gone home from the centers had worked with attendants for a few years, and had worked out some systems of community support. However, they also needed the psychological support of other survivors. That's where the Toomeyville Jr. Gazette (later to become the Rehabilitation Gazette) came in.

Gini led a letter-writing campaign in 1959, alerting survivors in every state to write to their congressmen urging national attendant care legislation. The national campaign was unsuccessful, but it called Washington's attention to the problems of people with severe disabilities. However, the California campaign was successful due to the efforts of the respiratory polio survivors, and state legislation established attendant care (in her words) "that later cleared the path for the independent living movement – for attendant care is the linchpin of independence." The 1959 campaign for national attendant care demonstrated and solidified Gini's belief in networking – the power of connecting people with people and the power of information.

"Networking links people who share common needs or common goals. Networking is a support system. It is a method of self-organizing. It is the structure of a social movement. Most of all, it is a method by which people get things done."

The following excerpts from the GINI archives demonstrate her persistence, her acceptance of people as they were, and her constant connecting.

Later Gini received this postcard from Ed Roberts:
"Editor, I am sorry you did not come to me to update the article. This article taken from Parade Magazine was not only inaccurate in many instances but also poorly written. I am sorry to say that you have compounded the errors ..."

Gini responded August 3, 1965:
"Dear Ed, Mea culpa, mea culpa, mea maxima culpa..." and explained why she had not consulted him. "I shall be most grateful if you will tell the story of your teaching career, living at and attending university. It is vitally important, not only to the young would-be college students but to the vocational rehab departments who will be financing their studies. Meanwhile, could you help with some information as to your present living arrangements at the Cowell Hospital? A very brilliant young respo in Germany is fighting to find a university in the U.S. which he can attend." 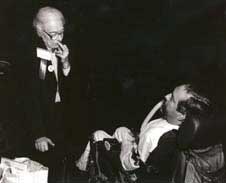 Gini sent Ed another note dated August 12, 1965:
"Dear Ed, My friend, Adolph of Germany, has sent the enclosed letter to me to forward to you. Do hope you are the magic button for him. I am so interested in helping him attain his pinnacles. Cheerio, Gini."

On September 9, 1970, Ed Roberts, in a postcard, made the following announcement:
"I have begun [a] consultation business for anyone needing help with problems of cripples. Thus far I have consulted with Health, Education and Welfare in Washington, DC, about programs for cripples in higher education. Helped secure $80,000 grant for University of California at Berkeley program run by cripples for the education of cripples. I brought John Hessler in as director. He is doing a magnificent job. Would you like to hear more? I believe no other consulting firm like this in country!"

He shared his philosophy with her in a 1970 letter:
"I am tired of well-meaning non-cripples, with their stereotypes of what I can and cannot do, directing my life and my future. I want cripples to direct their own programs and to be able to train other cripples to direct new programs. This is the start of something big . CRIPPLE POWER."

Another clipping from the archives dated January 31, 1971 documents a shift in thinking:
"Judy Heumann grew up being called crippled, but today calls herself 'disabled and discriminated-against.' She feels that the word 'crippled' suggests that a person is not physically whole. 'If militancy means asking for something that is yours, then we're militant,' said Judy, president of the group. 'We're just tired of remaining silent just because we're scared of losing the little we have.' "

In 1988, Gini Laurie, at the Center for Independent Living in Springfield Illinois, reviewed the independent living movement:
"Independent living did not just happen. Two quads in Berkeley in the early 1970s did not wave their mouthsticks and say, 'Let there be IL centers.'

"The independent living movement was not isolated. It was very much a part of its time and a reflection of its time." She further mentioned some of the influences on its evolution.

"The movement was influenced by the awakening of the importance of the individual; of the worldwide awakening to the rights of individuals and minorities. The independent living movement paralleled and was patterned after the black and women movements.

"It was influenced by the fact that there were many more healthy and long-lived disabled and elderly because of medical advances, such as penicillin. There were many more healthy, long-lived, and severely disabled veterans who survived Korean and Vietnam [wars] due to better evacuation and treatment learned during WWII. The movement was also influenced and preceded by other organizations: Canadian Paraplegic Association, Paralyzed Veterans Association, The National Paralysis Foundation, [and] American Coalition of Citizens with Disabilities (ACCD)."

"The ACCD was very important . because, for the first time, people who were blind, deaf, and physically disabled worked together for their mutual benefit. It brought together people with disabilities from east, west, midwest, and south. I was a token non-disabled member of the coalition."

Gini continued to publish the Rehabilitation Gazette until her death in 1989. She had added Polio Network News (now Post-Polio Health) for polio survivors who were experiencing what has come to be known as the late effects of polio, and IVUN News (now Ventilator-Assisted Living) for ventilator users. She spent fifty years of her life supplying people with disabilities with information and knowledge and connecting people with people.

Gini many times ended her presentations with caveats:

"Beware of bringing the hospital home; beware of making the cost of using a ventilator astronomical. Society will choose the more economical alternative – no ventilator."

"Beware of UBI, universal bureaucratic idiocy – be careful you don't become what you were originally created to fight against."

"Reach out to the aging population. ILCs should practice what they preach; hire [people over 70] as peer counselors; put older people on [their] boards."